A Eureka Moment for The Creative Clinic

We’re finalists at the Digital Awards 2016!

As some of you may have noticed, The Creative Clinic loves creating work that positively benefits local communities and one of our favourite types of client to work for is charities. About 30% of our work revolves around creating awareness and fundraising campaigns, websites, social enterprises and more for some of the charities that operate both locally and nationwide and it feels great to be able to help them champion their causes.

One project in particular that we’ve been working on recently – a website for mental health campaigner Jonny Benjamin – stands out because of how unique it is and how proud we are to be a part of it. Mental illness is an area that we are very familiar with, following our work with the charities Jami and Rethink Mental Illness, and also with psychotherapy clinic Reflections Therapy Centre. In 2008, a 22-year old Jonny Benjamin stood on Waterloo Bridge, about to take his own life after battling with a recently diagnosed schizoaffective disorder. A passing stranger saw him and talked him down from the edge which led to Jonny’s eventual recovery, but he never found out how to reach or find the man whose small act of kindness saved his life and knew him only as “Mike”. Jonny was determined to find and thank him so he started the #FindMike campaign which ended up reaching 300 million people worldwide and made him and  his story, a social media sensation.

Since then, Jonny has become an award-winning campaigner for the mental health issues that young people struggle with, the aim being to educate and help break the stigma surrounding the subject. In his meteoric rise to become one of the most recognisable faces of mental health campaigning, Jonny publically speaks, writes, blogs, vlogs, has a book in the works, a play about his life and has appeared numerous times on Channel 4, BBC, and news publications all over the country, all in order to help people who are experiencing the same struggles he once did. This is why we were honoured when he approached us to design and build him a fully mobile responsive website, and also marketing material for his film ‘Stranger On The Bridge / Finding Mike’. The website recently went live and can be viewed at http://jonnybenjamin.co.uk. To learn more about his campaign or to contact Jonny, please visit his site. 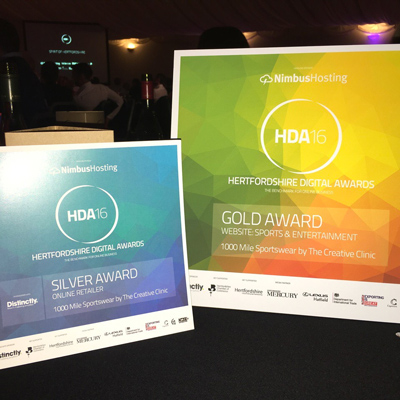 Gold and Silver win for the Creative Clinic at the Digital Awards 2016!